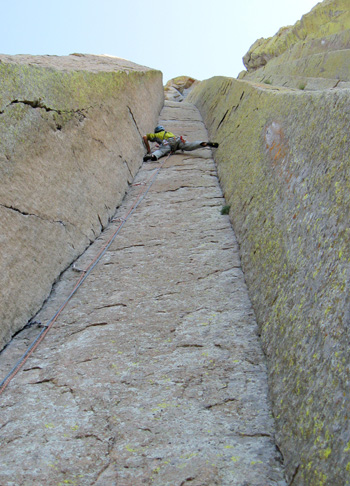 November 2016 : Our trip ended in 2009. We've been back to a "normal" life since then. We live and work in Boulder, CO, but still spend as much time climbing as we can!

We're not making any progress on the site anymore... Between jobs, climbing, and (more recently) biking, we're not likely to have a major update anytime soon...

Not sure what to do... where to go? Then start here and follow the arrow signs. This will take you through a chronological sequence of trip pages. Some of these pages also have links to various climbs. Or, start from the end for the most recent travel page: 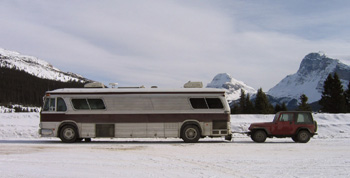 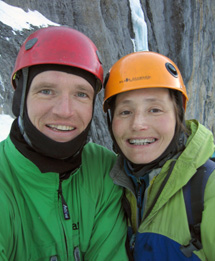 Our goals are simple: find a good mix of cragging, alpine rock, waterfall ice and mountaineering throughout North America. We also spent 6 months in New Zealand and Australia, between September 2007 and April 2008. Other destinations for this trip included the East coast (New York, New Hampshire, West Virginia, and Tennessee) and Québec for a season of ice climbing. After a summer in Wyoming, we're heading south to Moab for a desert climbing extravaganza.

Obviously, to be able to afford living on the road for so long, we need to keep costs down in every way we can. The western US is fortunately still largely undeveloped, and public land is everywhere, making it possible to camp for free in most places. The bus is well equiped for extended periods of so-called "dry" camping (or "boondocking", i.e. without access to water or power sources). Occasionally, we are forced to spend some time in campgrounds at national parks, recreation areas, and the like. Unfortunately, over the last several years, fees in Forest Service and other public campgrounds have been sky-rocketing at rates vastly exceeding official inflation rates. As an example, poorly maintained camps along the Tieton river (WA), with dirt sites, pit toilets, and no host are now asking for $17 to $20 per night! This is simply ridiculous. For anyone wanting to spend significant time in those camps, it translates to about $600/month. You can still rent a small, fully equipped apartment in many areas of the US for that much money! These outrageous camping fees also combine with the spread of all sorts of "recreation fees" in most areas of the country. Just in the first 3 weeks of this trip, we have already paid $13 for a Fish and Wildlife Vehicle Pass for the Tieton river, and $60 for two Northwest Passes (one for the bus, and one for the Jeep). It is time to do something about this. If you care at all, please start writing letters to the managers of your local public lands.

Hope you enjoy this series of reports! 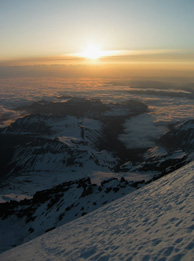 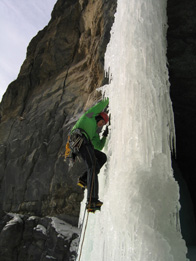 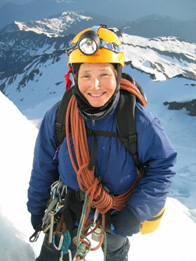 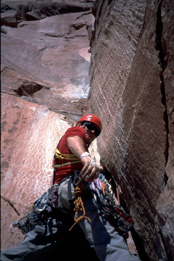 If this is your first visit, you may want to read the section below to learn a bit about our background.

We are two temporarily-retired engineers & climbers who have decided to suspend their professional careers and otherwise "normal" life to undertake a 2 year long (or more...) road trip to climb throughout North America (and other places).

Originally from Belgium and France, we have lived in the USA for several years. We started climbing in 1995, after moving to the small town of Los Alamos, in Northern New Mexico. Climbing instantly became a life-altering passion for us and has occupied every hour of free time since. We practice most every form of climbing on rock, waterfall ice, alpine terrain, and high mountains, with a preference for longer multi-pitch technical routes. Before this trip, we have climbed extensively throughout the Western US and Canada, as well as occasionally in Ecuador, Bolivia, Mexico, France, and Italy (for more details, click here).

After "tying the knot" in 1998 on the summit of Longs Peak, CO, and after several years of intense "weekend warrior" climbing life, we decided four years ago to take a second plunge together: quit our jobs and go climb full-time for a while. In January 2003, we both quit our full time engineering jobs and vacated our rental apartment to go spend a good part of our savings on the road, climbing as close to full time as weather and physical ability would permit. A year earlier, we'd purchased an old 1963 GM 4106 passenger coach, which had been converted into a motor home by a retiree in California. This bus would become our only home for the duration of the trip.

That first trip lasted over two years. We went back to a more "normal" life in Los Alamos for two years, before leaving it all behind again for a second trip on May 20, 2007.

This site is essentially an account of our travels and climbs. As we do not have internet connections or cell phones, it will also hopefully help us keep in touch with friends and family. The site contains mostly photographs, as well as short summaries of our adventures along the trip. Do not expect English literature here, just an honest account of our experiences. The photographs included in the site are shown as low/medium resolution thumbnails. Higher resolution images (JPG files around 500KB) can be viewed by clicking on any thumbnail. Full resolution images (a few Mb each) can be obtained if desired by requesting them by e-mailing webmaster at ericandlucie.com.

All contents, including logos, text, trip reports and pictures are copyrighted to the authors of this site; please ask for permission before using them for anything other than personal viewing. 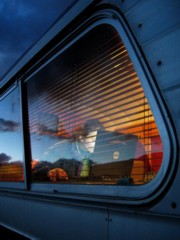 We will try to update this site as frequently as possible, but depending on the availability of suitable internet connections in public libraries, universities, and other random places across the country and Canada. Since going out to climb will always take priority over editing a web site (duh!), there may be times (like long periods of good weather!) when we fall behind (way behind!).

Please do not hesitate to send your comments (and bug reports) to: feedback@ericandlucie.com.